Racing at the FBK Games – a World Athletics Continental Tour Gold meeting – and with the world record always in her sights, the double world champion took more than 10 seconds off the 29:17.45 global mark for the 25-lap event which had been set by Ethiopia's Almaz Ayana at the 2016 Olympic Games in Rio.

On world record pace from the start, the Dutch star began behind pacemakers Diane van Es and Jackline Rotich, with Van Es taking the leaders through 1000m in 2:56.12.

Rotich was then to the fore, reaching 2000m in 8:47.91, but soon after Hassan was clearly wanting to push the pace. With 19 laps to go she had passed the pacemaker and was following the Wavelight technology, steadily ticking off the laps.

She went through halfway in 14:38.75 and continued to get quicker, running a 2:45 final kilometre and lapping the entire field which included seven other athletes who would go on to achieve the Olympic qualifying time of 31:25.00. Crossing the finish line with 29:06.82 on the clock, Hassan raised her hands to the air and then sank to the track in delight.

“Wow, to run this world record here today in Hengelo is something I could only dream of,” she said. “It's the perfect confirmation of the hard work we've put in getting ready for Tokyo. I am so happy to share this record in front of my Dutch fans. I am so happy!”

Hassan adds this latest mark to her world records in the mile, one hour event and road 5km.

More than a minute and a half behind her were Kenya’s Irine Jepchumba Kimais and Daisy Cherotich, with Kimais narrowly claiming the runner-up spot – 30:37.24 to 30:37.31. Their compatriot Joyce Chepkemoi Tele was fourth in 30:59.01.

The women’s 10,000m had been the first track event on the main programme and it ensured that celebrations for the 40th FBK Games started in superb style. Innovations at the event – which welcomed 1500 fans to the Fanny Blankers-Koen Stadion – included a live ‘second screen’ broadcast and a virtual audience connected by Zoom, and fans were treated to even more record-breaking performances as the meeting went on.

World pole vault record-holder Mondo Duplantis had been looking to return to winning ways after a rare loss at the Wanda Diamond League meeting in Gateshead but he didn’t stop at just securing victory, eventually clearing a world-leading height of 6.10m and attempting a world record of 6.19m.

Although the world record was not to be this time, the 21-year-old’s third-time clearance of 6.10m – a height only he and Sergey Bubka have ever achieved outdoors – was hugely impressive. It also added 19 centimetres to the two-year-old meeting record which had been set by two-time world champion Sam Kendricks, who handed Duplantis that defeat in Gateshead.

“Since Sam wasn’t going to be here and I was just coming off a loss to him, that was my way to get back at him, to take his meeting record away from him,” Duplantis said with a smile. “I haven’t checked my phone yet but I’d imagine I’ll have a text from him.”

On his Hengelo debut performance, he added: “I felt really motivated coming to this meet, I haven’t felt like that in a pretty long time – that I really had something to prove. Today I wanted to show everybody that I can still jump really high.”

Sweden’s Duplantis had opened his competition by easing over 5.50m first time and he also achieved 5.74m and 5.86m on his initial attempts. The competition was won at that point but the world silver medallist also managed a world-leading 5.92m on his first try and then soared over six metres on his second attempt.

Asian champion Ernest Obiena and Dutch record-holder Menno Vloon finished second and third respectively, with both athletes having cleared a best of 5.80m.

World leader Jasmine Camacho-Quinn now has three of the four fastest 100m hurdles times in the world so far this season as she followed her world lead of 12.32 set in Florida in April with a dominant 12.44 meeting record in Hengelo.

Starting fast, she powered away in the second half of the race to finish clear ahead of Poland’s Pia Skrzyszowska, who ran a PB of 12.80.

The time was a pleasant surprise for Puerto Rico's Camacho-Quinn, who hadn’t expected to run so fast having felt tired after arriving in Hengelo the day before.

“I just wanted to get a good race in,” said the two-time NCAA champion, who moved to equal seventh on the world all-time list with her run in Gainesville earlier this year. 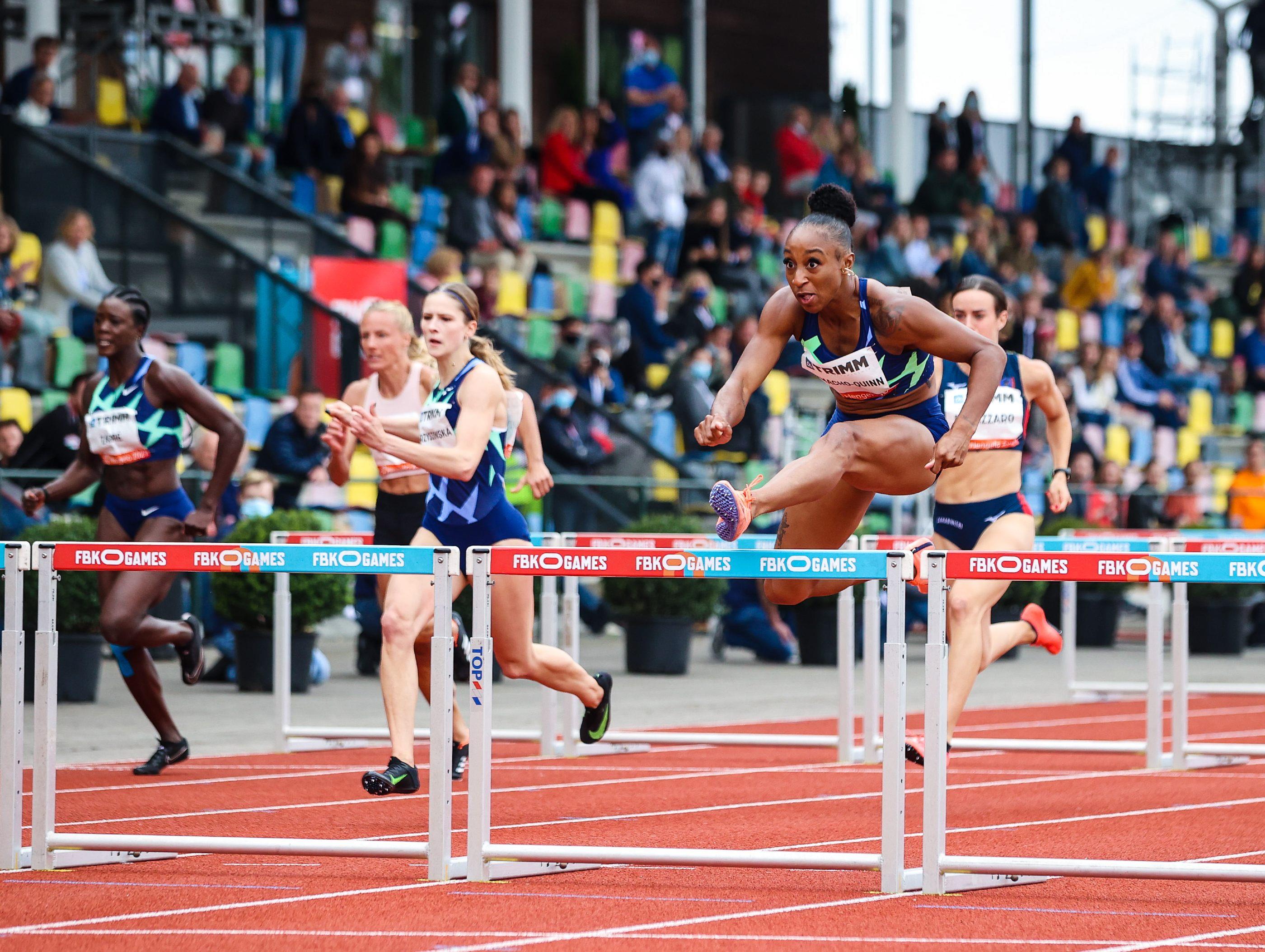 The women’s 100m delivered another dominant performance, with Britain’s Dina Asher-Smith achieving her first sub-11.00 time of the season after a similarly strong run two weeks earlier in a very wet and windy Gateshead.

Conditions were more favourable this time and the world 200m champion clocked 10.92 (0.8m/s) to win ahead of Nigeria’s world and Olympic medallist Blessing Okagbare (11.02) and improve the meeting record of 10.94 which had been set by two-time world 200m gold medallist Dafne Schippers in 2015.

“It was nice to run without a gale-force wind!” said Asher-Smith. “I’m happy to have put together a good race and won today. I was hoping to go a little bit faster, but it will come when it wants to come.”

Home favourite Schippers was also racing and clocked 11.15 in fourth after winning an earlier race in 11.22. Britain’s Daryll Neita ran a PB of 11.04 in third.

A well-judged race by Britain’s Jake Wightman led to an impressive 1500m victory as the European and Commonwealth bronze medallist kicked off the final bend and looked strong down the home straight to win by almost a second. His time was 3:34.67 ahead of Kenya’s Abel Kipsang with 3:35.63.

There was also a British winner in the women’s 800m as Jemma Reekie front-ran her way to lead a GB top three, clocking 2:00.77 ahead of her training partner Laura Muir with 2:00.95 and Ellie Baker with 2:01.02. Uganda’s world champion Halimah Nakaayi was sixth in 2:02.52 in her first race since last August.

Cuba’s world discus champion Yaime Perez continued her unbeaten record this year with a 65.91m throw which secured her the win by 11 centimetres ahead of Croatia’s two-time Olympic champion Sandra Perkovic. Portugal’s Liliana Ca was third with a throw of 65.07m.

A close men’s long jump contest was won by France’s Augustin Bey as he leapt a PB of 8.16m, with South Africa’s Ruswahl Samaai second thanks to a leap of 8.10m. Australia’s Chris Mitrevski was third (8.04m) and Italy’s Filippo Randazzo fourth (8.01m). European indoor champion Maksim Nedasekau of Belarus won the high jump thanks to a 2.24m clearance.

*Subject to the usual ratification procedure